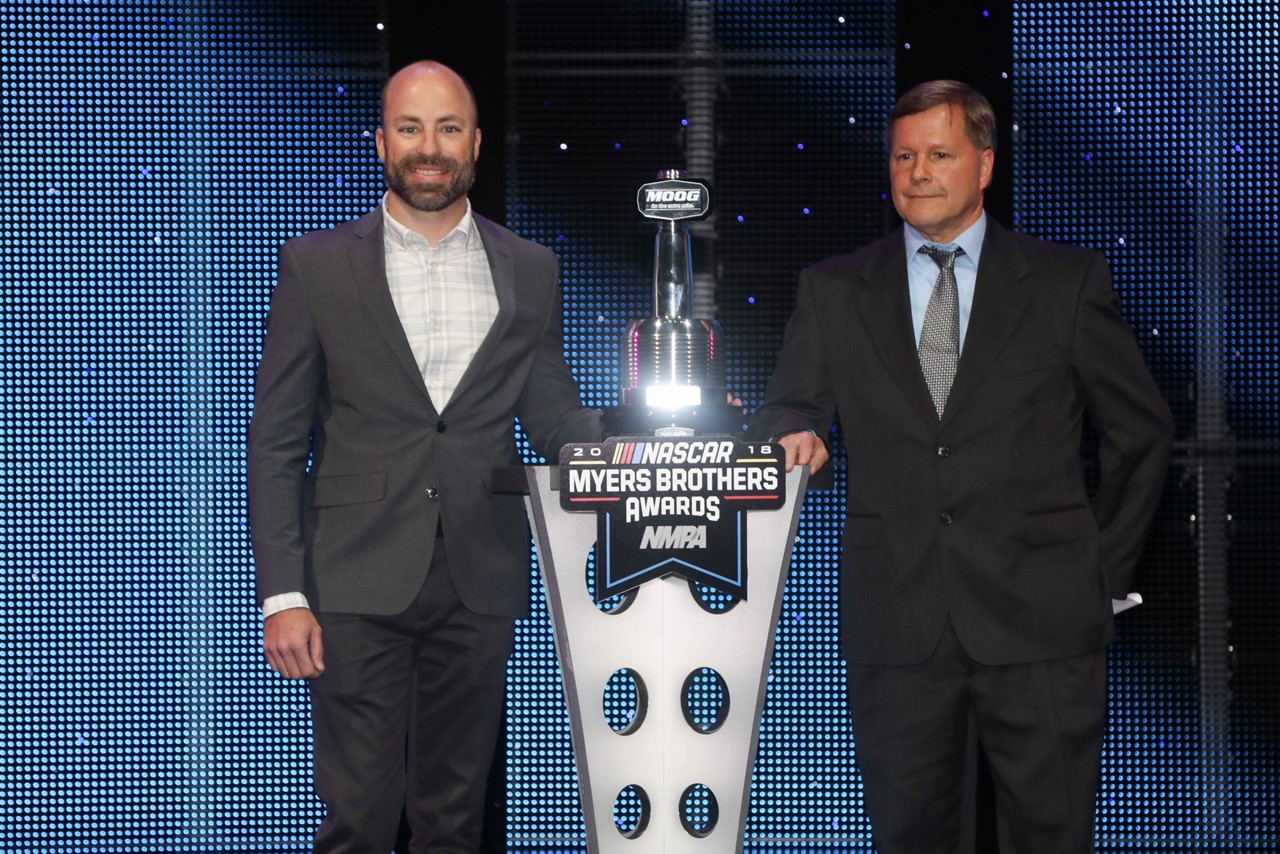 Adam Stevens, crew chief for Kyle Busch and Joe Gibbs Racing’s MOOG®-equipped #18 Toyota Camry, is the 2018 MOOG “Go the Extra Mile” Crew Chief of the Year. The award, given to the crew chief with the best overall performance in advancing a team’s competitive position during the Monster Energy NASCAR Cup Series™ season, was presented to Stevens during the NMPA Myers Brothers awards ceremony in Las Vegas, Nev. MOOG is a premium brand from Federal-Mogul Motorparts and the Official Steering and Suspension of NASCAR.

Stevens won a season-high five weekly MOOG “Go the Extra Mile” Crew Chief awards, which are presented to the crew chief whose car delivers the greatest improvement in average lap time from the first to the second half of a race while finishing on the lead lap. A total of 17 different crew chiefs earned the weekly award over the 36-race season.

“Succeeding with this team was inevitable, as it was through Adam’s initial success as Kyle Busch’s crew chief in the NASCAR Xfinity Series™ that he was rewarded by moving up to the Monster Energy NASCAR Cup Series, where they continued their winning ways and developed their chemistry,” said Tim Nelson, director of motorsports for Federal-Mogul Motorparts. “Adam’s engineering skills and on-the-spot decision-making earned him eight wins in 2018 alone, and pushed the team to become regular season points champion, qualified for the Playoffs, and advanced to the Championship Four.

“We congratulate Adam on his 2018 MOOG Crew Chief of the Year Award.”

As the MOOG brand’s Crew Chief of the Year, Stevens received a handcrafted MOOG ball joint trophy and $100,000 check from Federal-Mogul Motorparts.

The MOOG brand is the preferred choice of professional technicians and NASCAR crew chiefs. MOOG product engineers go the extra mile in developing innovative steering and suspension parts that provide superior performance, greater durability and easier installation. These benefits have helped drive the brand’s unsurpassed success in NASCAR competition, with every NASCAR Cup Series champion for the past 53 seasons driving to victory with MOOG parts.